The history of Spam. From Middle Ages till now

Spam, as in unsolicited commercial messages, came back from history and is obviously related to the human desire to promote products and services. One of the first documented spam cases is from medieval France, where a scribe called Herneis, wrote an unsolicited message on the last page of a book he had copied for a client. The message mentioned: ‘If someone else would like such a handsome book, should come and look me up in Paris, across the Notre-Dame cathedral’.

From this to +88 Billion spam messages sent daily, it’s just a matter of time and technology.

Modern spam, as in irrelevant or unsolicited messages sent over the internet, typically to a large number of users, for the purposes of advertising, phishing, spreading malware, etc. appears in the 90, when people start using email on large scale. MIT had a program called “mailbox”, all the way back in 1965, and even after 1971 when Ray Tomlinson invented and developed electronic mail, as we know it today, the usage was still limited.

On a limited scale, one of the earliest, but well know, episode in the history of spam happened in May 1978. Gary Thuerk, an aggressive marketer acting for Digital Equipment Corporation (a computer manufacturing company incorporated in 1957 and sold in 1998 to Compaq) sent an unsolicited presentation of an upcoming product to 393 members of ARPANET. ARPANET was an experimental wide area network, probably the first of its kind at a global level, and one of the precursors of the Internet. Gary Thuerk had worked for two days on the text promoting the brand new Decsystem-20 and, although he was aware that is pushing the envelope, he used a DEC engineer ARPANET account to send the messages. Nobody from the network liked that, but with that campaign, Digital Equipment Corporation managed to sell equipment worth 13-14 million USD. (The entire story at https://www.templetons.com/brad/spamreact.html#msg ) 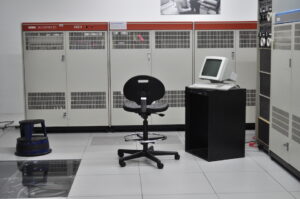 So, the ARPANET precedent fueled the dreams of a long list of aggressive marketers.

The shift towards large-scale spam happened by 1993 when e-mail replaced “electronic mail” in the spoken vocabulary, and America Online (AOL), Echomail, Hotmail, and Yahoo widespread Internet usage. Along with legit correspondence came also tones of unsolicited messages as a revolutionary method of promoting everything. Today’s situation is critical, with spam accounting for 84% of entire digital correspondence sent in September 2021, according to Talos Intelligence. We don’t know how much money the spammers make, but for sure it costs us a lot. For more info on this topic, please, read the article: The real cost of spam.

The term spam itself has a strange etymology. According to Merrian Webster spam origin comes from a skit on the British television series Monty Python’s Flying Circus (a surrealistic sketch comedy 45 episodes series, created by and starring the comedy group Monty Python airing from 1969 to 1974) in which chanting of the word Spam was a way to override other dialogues. As you may notice, the analogy with digital spam is easy to guess, due to unsolicited e-mail’s direct effects on overriding normal correspondence. 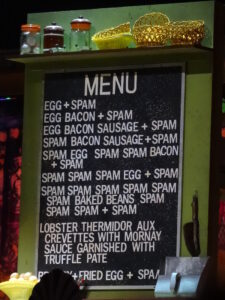 Nevertheless, from the same source, the official definition of spam is „unsolicited usually commercial messages (such as emails, text messages, or Internet postings) sent to a large number of recipients or posted in a large number of places.”

Other opinions correlate spam with a kind of notorious pork can brand from 30s, made by American company Hormel Foods. Hormel Foods even registered SPAM as a trademark and try to convince the owners of a spamming website “spamford.com” to eliminate the word from the web domain. 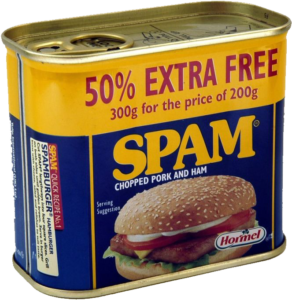 The future of spam

The future of spam is unknown, but nevertheless scary because cybercrime uses the same level of technology as the cybersecurity industry. So, we must expect AI, neural networks and deep-fake to be integrated into all future threats, spam included.

Besides relying on antispam filters, if you are a Gmail for Business user you could also try out Spam-Digest for Gmail. It allows you to receive, directly in your Gmail Inbox, the list of the spam you received recently, and makes it easier to spot any legit emails that landed in the wrong place.

The history of Spam. From Middle Ages till now

What is the true cost of spam?

How to whitelist an email address in Gmail